What is Jekyll? | A Complete Guide by Tiiny Host

People all around the world use WordPress for developing websites. WordPress is one of the most reliable content management systems that help beginners and pros at the same time. Unfortunately, some situations are not under the control of web developers. This is where Jekyll comes in to sort out complex issues.

Jekyll is a lightweight alternative to solve complicated issues of a website. With Jekyll, it is easier and simpler to operate multiple websites without giving database access to anyone.

Jekyll was first introduced in 2008 by Tom Preston Werner. Afterward, it was taken over by another British developer, Parker Moore. Since then, he is the continuous maintainer of the Jekyll website generator. 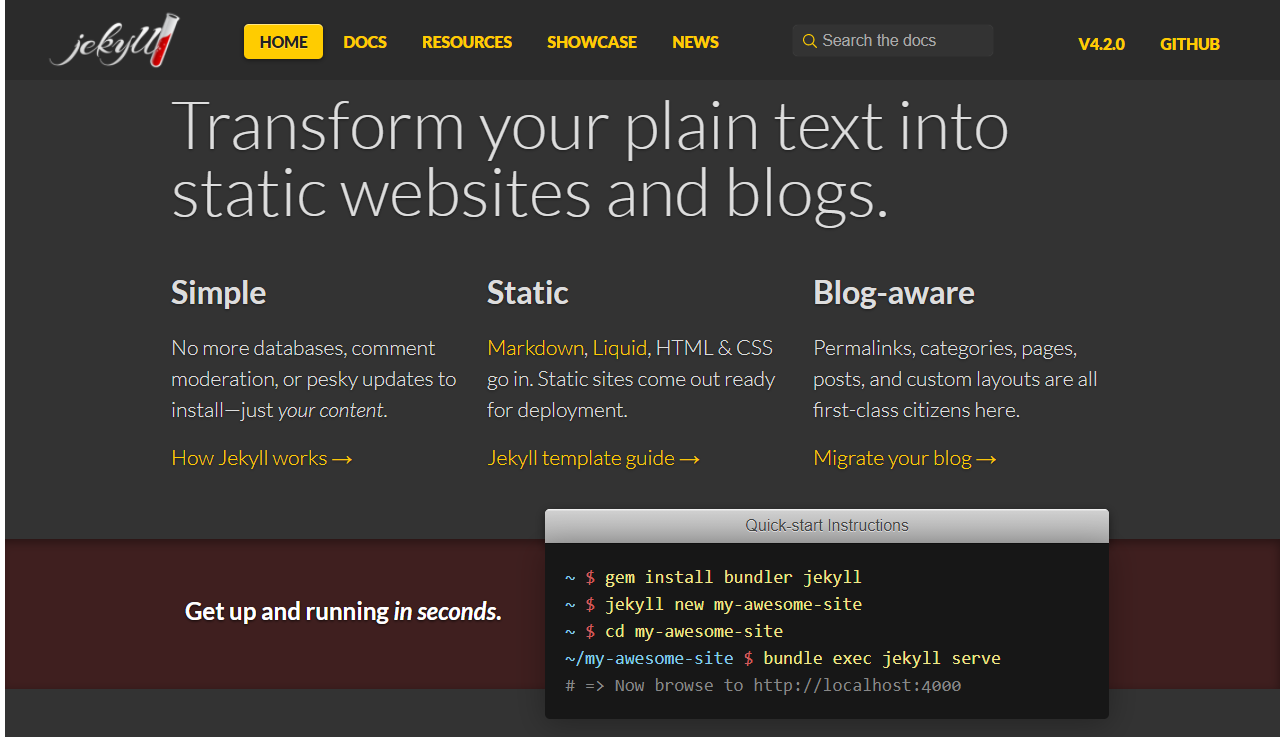 Jekyll is written in Ruby (Ruby is a high-level programming language). It contains a directory comprising static text and another set of structures. Both have separate functions. One of them sets and displays the layout of the website. The other manages the web content.

However, Jekyll does not come with an internal editor. Thus, you need to use a separate editor to handle and edit the classic code writing.

PRO TIP: Use Prose, to edit the code writing in Jekyll.

The prose is optimized for simplicity and convenience. There are some prerequisites to ensure they are fulfilled before you install Jekyll.

The first and foremost step you need to take is to install the command line tools on your computer. Run this code “ $ xcode-select –install “ to directly install command-line tools.

Before installing them, you can also check if you’ve command-line tools installed already. For this, open the terminal and type in “gcc -v”. This code will let you know if the command line tools are installed or you need to install them.

Ruby is pre-installed on most computers. To confirm this, run the code “ruby -v”, it will prompt you if you need to install Ruby on your device. If Ruby is already installed on the computer, the code will return with a Ruby version of 2.4.0 or higher.

If the version is not updated, you can update Ruby to its latest version.

For those who don’t know bundler, it is a package manager. Bundler assists in downloading Jeykyll dependencies.

Run the command “$ bundle install” in the directory that has the Gemfile.

The command will take a while to run and complete the entire process. It may ask you for your sudo password in the running process. Once the processing is done, it will show you a pop-up stating “ Bundle Complete!”

After you’ve completed all the prerequisites, now follow these steps:

As soon as you complete the described process, your Jekyll setup will be completed.

Open the browser and head over to http://localhost:4000. You’ll see the website you’ve just created.

That’s all! Congratulations you’re all done and good to go!

What are the Pros and Cons of Jekyll?

Jekyll is a great alternative to complex content management systems. You can create static websites and blogs within minutes. But don’t forget “all that glitters is not gold” as Jekyll has tons of benefits, similarly, there are some drawbacks of using Jekyll.

How is Jekyll Different from other Content Management Systems?

There is one vital reason why you should use Jekyll instead of content management systems.

There are still some content management systems that build websites with a database connection. However, they are more complex and difficult to manage as compared to that of the Jekyll website generator.

Jekyll also stands out among the leading website generators such as Hugo. Hugo does not offer a direct connection to GitHub. Whereas Jekyll enables its customers to directly connect to GitHub. In this way, users can take advantage of the free hosting service and version management features.

So what is Jekyll?

What is Marzipano? | Here is a Complete Guide
How to track website analytics for your freelance business website using Google Tag Manager in 2021